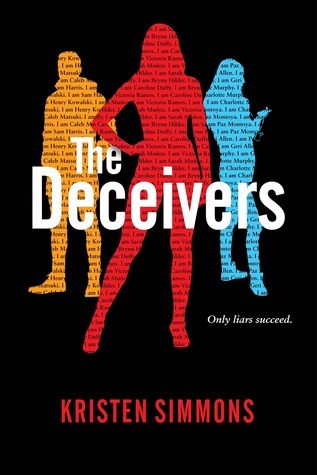 *I voluntarily read and reviewed an ARC of this book. All thoughts and opinions are my own.*

Welcome to Vale Hall, the school for aspiring con artists.

When Brynn Hilder is recruited to Vale, it seems like the elite academy is her chance to start over, away from her mom’s loser boyfriend and her rundown neighborhood. But she soon learns that Vale chooses students not so much for their scholastic talent as for their extracurricular activities, such as her time spent conning rich North Shore kids out of their extravagant allowances.

At first, Brynn jumps at the chance to help the school in its mission to rid the city of corrupt officials–because what could be better than giving entitled jerks what they deserve? But that’s before she meets her mark–a senator’s son–and before she discovers the school’s headmaster has secrets he’ll stop at nothing to protect. As the lines between right and wrong blur, Brynn begins to realize she’s in way over head.

I saw someone recommend this book to fans of Veronica Mars and when I saw it dealt with teens learning how to con people I had to try it out. I’ve been trying to stay away from books with high schoolers in board school, since I seem to not be liking those lately, but this wasn’t bad. There is none of the usual high school drama, because this is so much more than high school.

This book is about conning people and understanding at what point is it too much and how to remain on top when the cards are all against you. It is a journey to be sure. I will admit to not seeing the ending coming at all. Throughout the book I wasn’t sure who to trust nor how things would end up. In fact, I’m not even sure if this won’t have a love triangle eventually or that Brynn won’t leave and decide to take down Vale Hall — I honestly have no idea how this series will turn out and it is somewhat refreshing.

Now this isn’t to say I was always a fan of this book. I think if I was perhaps even 5 years younger I might totally love this book. I’m not the target audience and that makes sense. That being said, I think the target audience won’t have a problem with it. There were times I was just too concerned with the practicalities that youths might not think about, such as labor laws and legal issues.

I will totally recommend this one to people who like Ocean’s 11, people looking for clever teens fighting with wit and words rather than swords, and not swamped in the romance. Yes there is a romance and kissing, but it isn’t overdone.
Will I read the next book? Probably not, but if this ever becomes a TV show, I might watch it.